The masters of modern Japanese style painting left countless masterpieces in the turbulent times of the Meiji, Taisho and Showa periods, which greatly influenced the painters of the following generations. Among such masters are Taikan Yokoyama and Shunso Hishida who worked for the modernization of Japanese style painting through the Japan Art Institute (Nihon Bijutsuin), Gyokudo Kawai who gained popularity with his paintings depicting farming village landscapes as well as Shoen Uemura and Kiyokata Kaburagi who depicted beautiful women in the four seasons and customs. These painters are widely renowned even today and have not stopped fascinating us.
According to two themes of "the Japan Art Institute" (Nihon Bijutsuin) and "Bijin-ga" (portraits of beautiful women), this exhibition will introduce the artworks of these Japanese style painters who are referred to as "masters". In addition, festive pictorial materials will also be featured to celebrate the new year.
To be held concurrently is the exhibition of our entire collection of the nine paintings by Tatsuo Takayama (1912-2007) who has been deceased for 10 years as of this year. Tatsuo, who was born at the end of the Meiji period and led the world of Japanese style painting, was also one of the painters who were referred to as "masters".
From the painters of the Meiji period when modern Japanese style painting was born to those who are currently active, follow the transition of Japanese style painting and be charmed by each period and artwork. 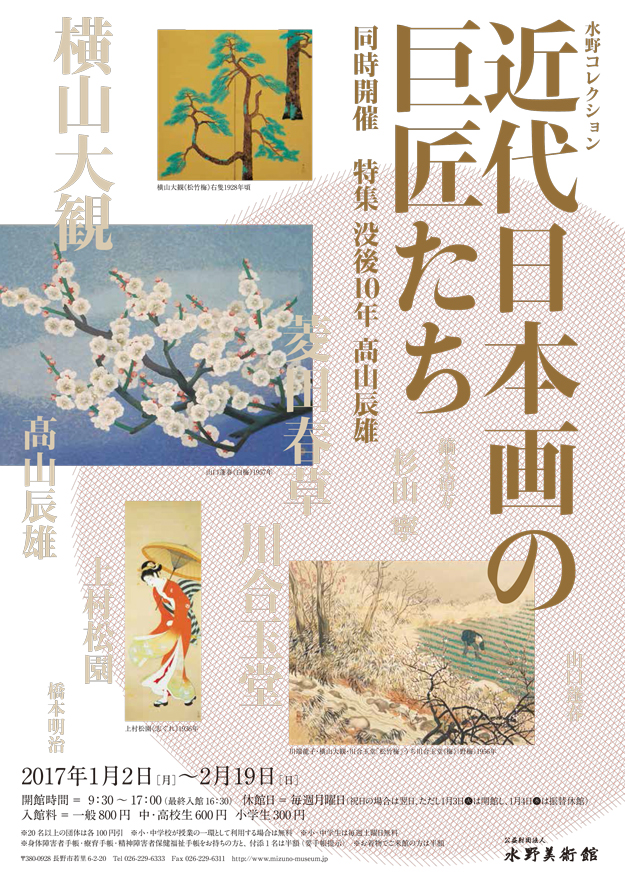